Listening is a loser, at least according to the widely circulated Pyramid of Learning: 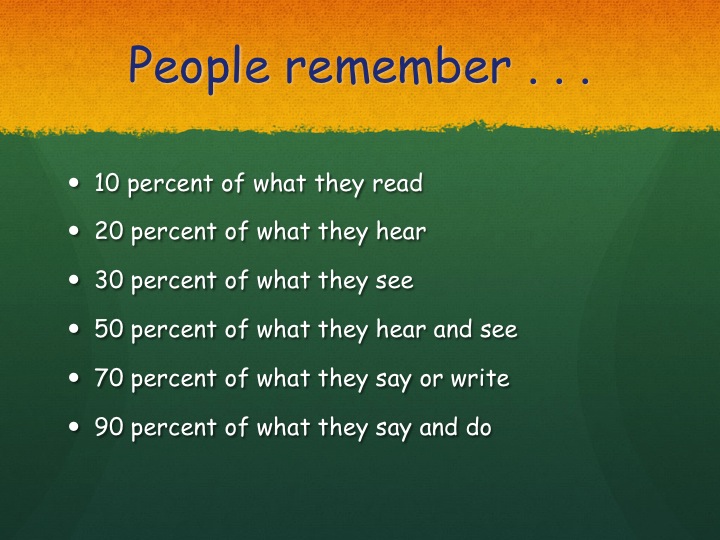 I’ve been hearing about the Pyramid of Learning — also known Dale’s Cone of Learning — since I was a child. Yet it has a problem. Specifically, a lot of credible people believe it to be “zombie learning theory that refuses to die.”

Digging through the evidence to find out exactly what is true turns out to be difficult, partly because there are just so many sources that repeat these numbers. One of the best I have seen is by Candice Benjes-Small and Alyssa Archer on the Association of College & Research Libraries blog (these are the folks that called the learning pyramid a “zombie learning theory”). They gather sources and trace how this idea started as a conceptual model about conveying information at various levels of abstraction. There were no numbers making any retention claim. At some point, most likely during World War II, the graphic of the pyramid emerged with numbers attached to it representing retention percentages.

The graphic of the pyramid and numbers makes it feel irresistible. Matching the strength of their appeal with a strident attack, Will Thalheimer has described the pyramid as “dangerous” and a “fraud” on his blog Will at Work Learning. A fairly comprehensive timeline of debunking sources can be found at the Institute for Learning Professionals. The American Society of Engineers published a conference paper with a detailed, balanced refutation including graphical representations of where these numbers appear to come from.

As appealing as that notion [of the learning pyramid] might be, an exploration of the literature shows there is no solid, research-based data to support it. 1

Kaplowitz goes on to suggest the numbers themselves contain the seeds of their own destruction:

Even the numbers themselves should make us raise an eyebrow and question the so-called data. The percentages are just too perfectly distributed with each number being a multiple of 10 and the spacing of categories somewhat even to have arisen from any real-world experimentation.

That’s a lot of debunking, but is it enough? The appeal of the learning pyramid creates a pedagogical Scylla and Charybdis: If you tout these numbers, many teaching faculty will discount your credibility. But if you doubt the numbers, you may lose your connection with other faculty who embrace them. Benjes-Small and Archer advise “treading carefully.”

What does this mean for lawyers and law professors?

We are experts in being precise with words as well as being skeptical about claims. So we can avoid broad assertions of the pyramid’s scientific truth.

We can be careful in how we present information, testing it on audiences when possible and relying on our own experience as a guide. For example, showing a text-heavy Power Point while simultaneously reading the words is terrible. it doesn’t reinforce the information; it creates competing streams of information and, in a broad sense, is just plain annoying.

We can rely on more recent and more specific research into information retention. Not surprisingly, studies support the use of images: “Humans can remember pictures with 90% accuracy in recognition test over several days, even when the images are presented for only a short time during learning.” This is from Doug Linder and Nancy Levit’s The Good Lawyer: Seeking Quality in the Practice of Law, citing a study that is about 1000 percent more scientific than the cone of learning (as well as 1000 percent more difficult to read and understand). The science confirms the art of lawyering, as recounted by Linder and Levit:

Images are so effective to effective communication that David Ball contends a “trial attorney without images is like an art book without pictures.”

The fundamental truth behind Dale’s original concept is that information can be presented in many forms ranging from the concrete to the abstract. Whether teaching a class, making a presentation to clients, or arguing to a jury, we can “mix it up.” That’s not scientific, and there are fancier ways to say it, like Benjes-Small and Archer’s recommendation: “Think multimodal.” However it is phrased, this broad recommendation is more reliable than a neat set of mythical percentages.

2 thoughts on “A myth about listening and learning”